A group of about a dozen Toledo community members toured Woodland HS, Hockinson MS and HS and Parkrose MS yesterday. Participants commented about how much natural light was present in all schools and how some schools did not take proper advantage of that light. The schools were all two story structures and participants noted that the configuration didn't isolate students or create divisions. Ordinary classrooms were noted to have about 900 sf while Science and Art classrooms had 1200 sf. Technology included rooms with multiple teaching stations, projectors or monitors on the wall as well as amplification for teachers to help students hear instruction better. Woodland noted that their card lock system was added after the design phase. They noted that this had been a problem for them.

In talking about the tour on Jan. 30, participants noted that they would like to visit Bud Hawk Elementary in Bremerton. Photos of this school received the most positive feedback during the Jan. 10 visioning meeting. Ross Parker called this morning to say that one of the schools we'd planned to visit isn't ready for visitors yet. He worked out a plan that would allow our group to leave a little later in the morning, arrive back to Toledo a little later in the evening and be able to make the trip to Bremerton to see this school. Itinerary for this trip is below. Given the interest in the photos of this school, I think it makes sense to make the change. If you'd like to participate, please notify Dale Merten at ToledoTel. A limited number of seats may be available.

In all, participants on yesterday's tour remarked that they'd seen things that they liked and things that we should not include in our designs. Both pieces of information are valuable to the process. We hope you'll be involved if you're able. 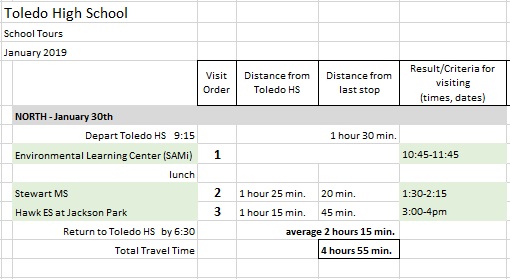 The community came together on January 10 to respond to photos of other recently-built schools in Washington. Members placed blue dots on photos that were attractive and red dots on photos that were not. In this way, we hoped to get some overarching sense of what the community would like in terms of interior and exterior features to the new building. You can see the results here. This is also where you'll find a copy of the video from that evening.

The board is currently working to schedule interviews with the Construction Management finalists. This will be done in an open  meeting with a decision to follow. The meeting date, time and place will be announced through ordinary channels.

I've been asked recently whether we're keeping the old gym and building a new one. No decision has been made on that. As with so many things in this project, the decision rests upon priorities and finances. I've been asked where the new school will be sited. There are a  number of possibilities and no decision has been made. One site is behind the existing shop in/near the Oak Grove and staff parking lot. Another site is in front of the current school. Another proposal has the new school sited at the extreme North end of the property. All of these sites (and any other options) will be considered based on how well they meet the interests of the community.

Decisions made to date:
We're  building a new school somewhere on the existing 40-acre site. It will have a pitched roof. It will be paid for with a $7 million bond, $10 million grant and SCAP funds maximized according to State formula. If you'd like to be part of the team that makes a design recommendation to the board, contact Dale Merten.

Ideally each tour/visit would be 30-45 minutes max; the above includes flex time for bio-breaks/traffic. We recognize it’s a long day but I think the full range of things to see will both inform and inspire.  Please respond today as Dale is arranging a vehicle(s) for transport.  Also let him  know if you prefer to drive your own car.

Details for the South Tour January 23

Details for the January 30 North Tour are still being finalized. If you're interested in attending, please let Dale know.
Posted by Chris Rust at 7:13 AM

Progress the week of January 14

We've completed reference reviews of all three firms. At their regular meeting last night, the boad requested a special meeting to interview the manager from each firm who would be assigned to the project as well as any ancillary staff that the firm's wish to send. We're working to coordinate these interviews now and to schedule this meeting as soon as possible.

Dowa/IBI has assisted us in scheduling two tours of recently-completed schools. The first tour will take place on January 23 and will visit Woodland HS, Hockinson MS and HS and Parkrose MS. 15 members of the Design Committee will be on this all-day tour and will bring back their impressions to help guide the design process. On January 30, we'll repeat the process and visit schools to the north of Toledo. Ross Parker from Dowa/IBI is confirming the schools today and should have the final roster by next week. Each of these schools is comparable in scale to the new THS and some are award winners for design.

Dowa/IBI has forwarded images from the visioning meeting as well as a video of the event. You can find them here. This is my first attempt to upload a video and I'm hoping it works. If you have problems, please email me. I may upload to YouTube if this isn't working. The video is 2 hours long, so you'll want to pop some popcorn and settle in if you plan to watch the whole thing (I didn't)

Once a Construction Management (CM) is selected, meetings will begin in earnest to develop a Request for Qualifications for architects and to develop educational specifications and construction schedule.
Posted by Chris Rust at 10:40 AM

The Design Committee scored the Statements of Qualification and narrowed the field to three firms:


I've been working this week to contact references and to develop additional sources of data on these firms so that I can advise the board. The board is expected to set a special meeting to conduct interviews of the firms and to make a decision on who to represent the district's interests in managing the construction of the new school.

This is an important position. The firm selected will be responsible for managing all aspects of the project from pre-design through selection of the architect to bids, construction, close-out and commissioning. They will represent the district in all of these regards and it is their expertise that will bring the project in on budget and schedule.

While there is a desire to complete this project as soon as possible, it is more important to do it right rather than doing it quick. On the other hand, construction costs are escalating quickly. Three years ago, we could have gotten a lot more for our money than we can now and costs continue to rise. This balance of do it right vs. do it fast (and for less money) is what we're counting on our Construction Manager to do.

Sixty community members, staff and students met on January 10 to envision a new Toledo High School. The purpose was to hear some of the ideas that have been surfacing in the community and generate some excitement for the project. The meeting was facilitated by the architectural firm Dowa/IBI ("DOW-uh eye-bee-eye") The team included Jason King, a 2007 graduate of Toledo High School who now works as a Civil Engineer in Boise.

Participants shared memories of the current school and important places and then looked at photographs of existing schools. They placed red dots on photos of things that they wouldn't like to be part of the new school and blue dots on photos of things that are attractive. The facilitators captured comments made during the visioning. In addition, participants recorded additional thoughts about the new school that were collected by the team. We're expecting a summary in a few weeks. When I receive it, I'll post it here. I'm adding the photos (without dots) as an attachment to this posting for your review. Visioning Displays

When the Visioning portion of the meeting was concluded, I presented information about a levy proposal that  will be on the February ballot. The current operations levy is expiring at the end of the year and a replacement is proposed to maintain the levels of programming and staffing that the community has come to expect from the schools. Levies pay for things that the State does not: athletics, extra curricular activities and travel, and Music to name a few. In addition, levy dollars support maintaining courses in CTE such as Wood and Metal Shop and Careers in Education. Finally, levy dollars supplement maintenance and repairs as well as low class sizes and additional instructional supports.

I've been asked why the district is asking for more money after just receiving $7 million. The answer is simple: the $7 million bond can only pay for a new high school. Not one penny can be diverted to operations. Nor can that money be used to repair or enhance any other school in the district.

The levy will continue the programs and services that are already offered and continue them. It is not a new tax. You can see a list of what the levy supports and a comparison of tax rates from 2017-2021 here Tax Rates

There was concern that our community might not be aware of the levy and that turnout would be too low to validate the election. We've learned today that no validation is required. The passage of the levy will be dependent upon the total votes cast only. No turnout threshold is required.

The Design Committee will begin looking at the visions of the community including drawings by students, emails to Dale Merten (Chair of the Design Committee) and input at future meetings to design the new school.